Folk funksters The Moonsets (formerly The Flumes) combine Electric Harp, Bass, drums and soulful vocals to create an eclectic blend of psychedelic folk laced with soul, funk, world, blues and a splash of subtropical groove. It's difficult to pin these musical adventurers down to one genre so be prepared to have any preconceptions blown in the best possible way.

Kayt Wallace artfully bends the organic tones of her 36-string electric Harp with guitar effects and a playing style that's all her own. Her smoky vocals sweep from whispers to soulful roars layered with the harmonies, rich grooves and the playful rhythms of Andrea Joy Norden on drums and songwriting partner Stephan Beattie on bass / guitar.

Over the years the trio have had the pleasure to share their unique sounds at Woodford Folk Festival, Palm Creek, Mitchell Creek Rock n Blues, Wallaby Creek, Australian Body Art, Rush, Island Vibe, Kuranda Roots, Folk Rhythm and Life, Earth Frequency and MONA and have been acknowledged with highly commended 4 times in the Blues & Roots, Folk and World categories of the QLD Music Awards.

The Moonsets independently produce and record on 100% solar power in their old wooden shack on the northern edges of the Sunshine Coast. 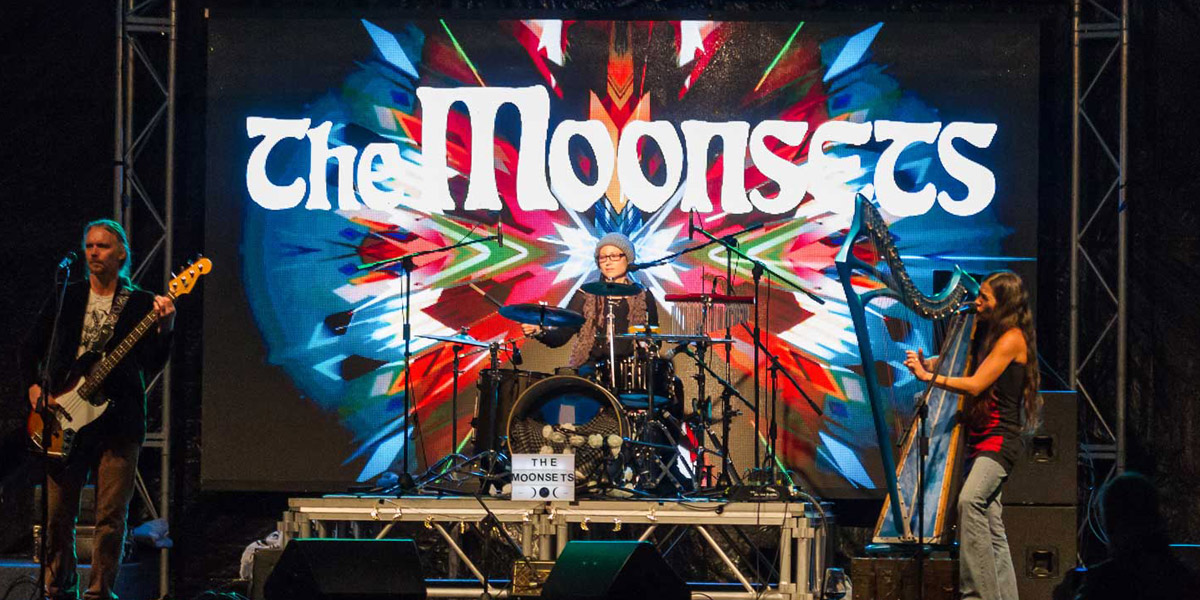 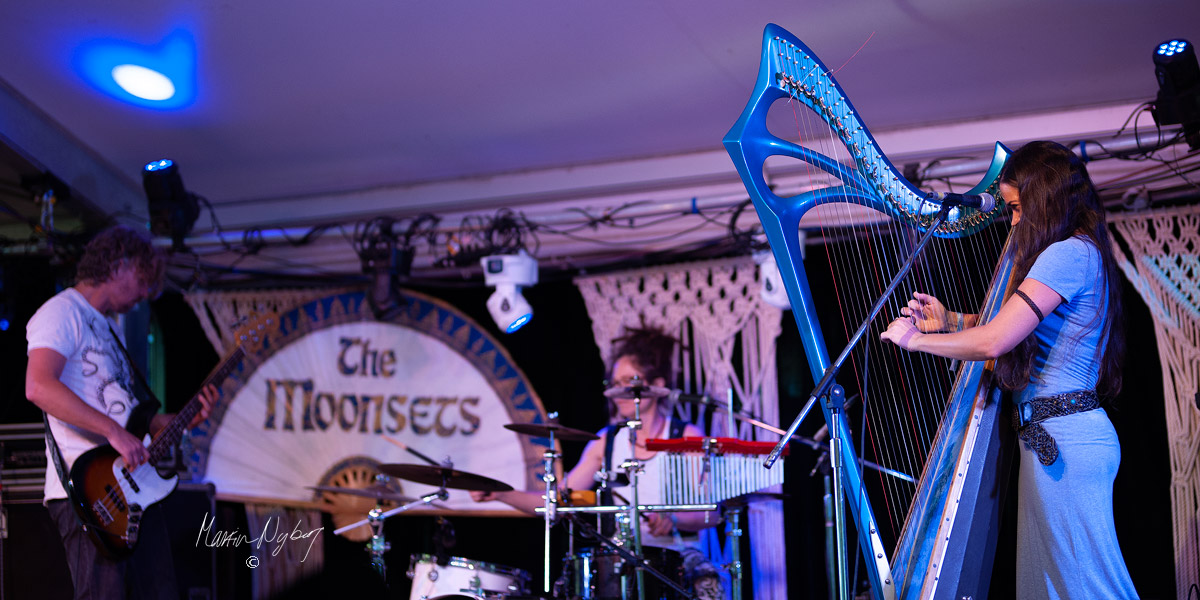 "This band weave you around their finger and take you on trip into those exotic and not so distant lands". Little Boom 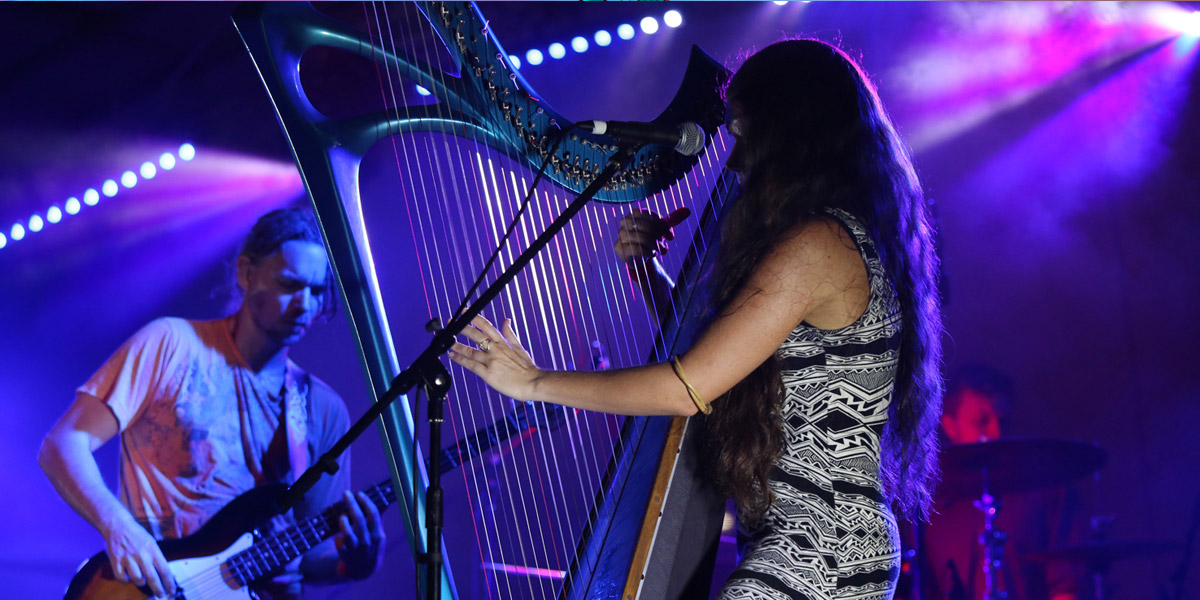 "She’s hot as blue fire how she manipulates the electric harp into a sound that’s all her own". - Found Magazine UK 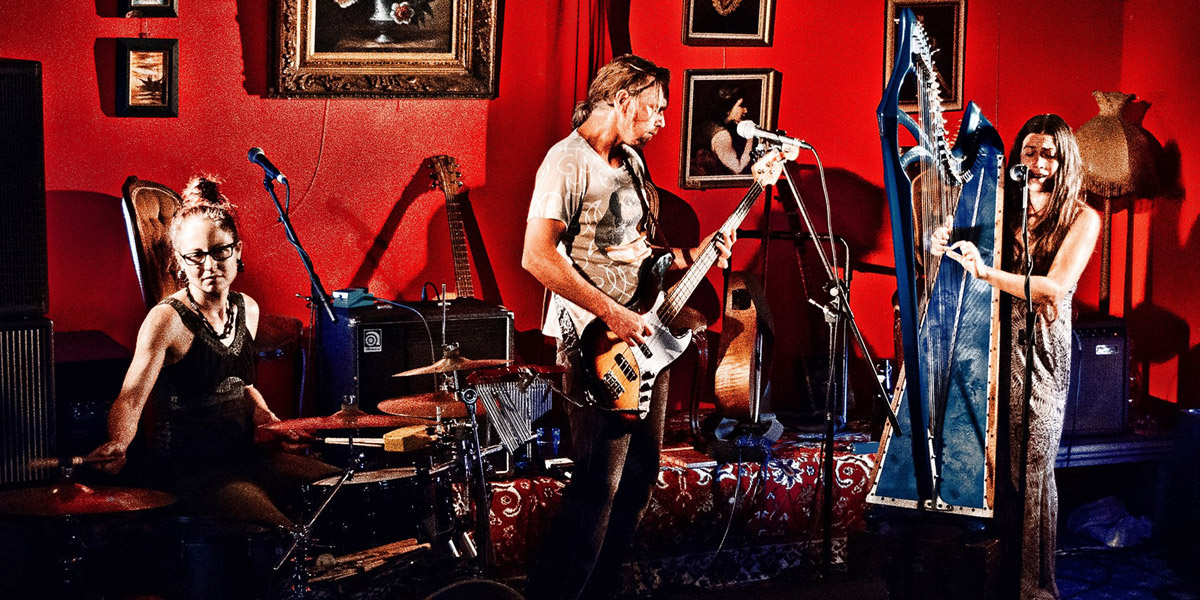 "it is very easy to be swept away by their soothing yet soulful show". - Hot Off The Press Cairns

"There is nothing cooler than an electric harp! The chilled vibes it creates and the pull and flow of the music are so enchanting". - Nkechi Anele Triple J

"Had no idea that an electric harp could have such a great, groovy, psychedelic and luscious rock sound, one that fits perfectly with the rest of the (fantastic) band and with some soulfully mesmerizing female vocals. Every song here shines in its own unique way, like pearls scattered in the sultry underbrush of a thick, tropical forest". Favorite track: Firefly. ~ muschiosauro

"The Moonsets play what you’d imagine in your head having known they’re from the ‘Sunshine Coast’ of Australia. Elements of psychedelic rock hazed with soulful and bluesy vocals and holding a pretty damn catchy island beat throughout. All in all this is a hot find and one I’ll be waiting for the rest of you to join the party soon". ~ Bucky

Surreal, psychedelic, and worldly this band has a creative flow and eclectic edge similar to the curated music of Putumayo. They have unique and playful lyrics, and fantastic chemistry between all instruments. ~ Divide & Conquer

"This band weave you around their finger and take you on trip into those exotic and not so distant lands.

It’s great to hear a cohesive album rich with new ideas and new twists. There is also something intangibly great about them being from out own shores. I would predict a good future for these guys if they keep pushing the envelope with these already high standards".

"You quickly realise that The Flumes are the perfect end-of-week cure".

"She’s hot as blue fire how she manipulates the electric harp into a sound that’s all her own. She does for the electric harp what Jean Luc Ponty did for the electric violin adding wah and psychedelic textures to what is traditionally thought to be a more classical instrument. Wallace’s harp streams solid warmth seamlessly in a clean medley of folk and jazz and accompanied by her unique vocal delivery, weaving both subtle whispers and soulful flair, makes for an outstanding front woman.

All we can say now is “We want more!”

"So very lush in my ear holes!" - JC Goodson

"Like pixies cavorting through an opium den in an albino rastafarian daydream. The Flumes seamlessly weave the organic tones of the giant harp with dubby grooves and rhythms - creating a lush cinematic brew".

"The Flumes are one of those rare musical finds that seem impossible to pigeonhole into one genre. So when listening to their hypnotising new EP, I gave up completely and allowed myself to be carried along on the meandering psychedelic ride that is "Swell".

"The earthiness of this group can be felt during any live performance where it is very easy to be swept away by their soothing yet soulful show. With a solid fan base and keen interest from music lovers The Flumes will no doubt bring a certain element of richness to the Kuranda Roots Festival where punters will get a taste of what this extraordinary group has to offer".

"The sound of the Electric Harp was intense, bass rounding out the edges and chick drummer Bam Bam tactfully placing a solid back bone to this soul-wrenching melodic orgasm, it truely was the first time I have been so mesmerized by such sounds… I will be heading out to see this band again..."

“It’s 1am on a Friday night. Lock & Load has just turned its lights on so everyone can see my drunk-ass face. I’ve had an unexpectedly embarrassing night which for the last hour I’ve been trying to kill with beer. I came here tonight to watch The Flumes, a friend’s band. The harpist – yes, this band has a harp. It’s about 6ft high, bright blue and electrified – is an old school friend of mine, Kayt. With her floor-length skirt and waist-length hair, plucking the strings of her harp she looks like she’s on a break from her real job of swimming about underwater and luring seamen to their deaths”.